skip to main | skip to sidebar

"This is one of the best shows of the year, stunning in its acting, staging and music – a thoroughly entertaining and enthralling performance.

The performance is also an amazing piece of musical theatre with music provided by four of the cast including the composer Jeff Henderson. The bass, horns, tuba, clarinets and drums are not just a musical accompaniment; they provide a soundscape which is integral to the work providing comment, structure and emotion to the play."
NBR - Wed 19 Nov 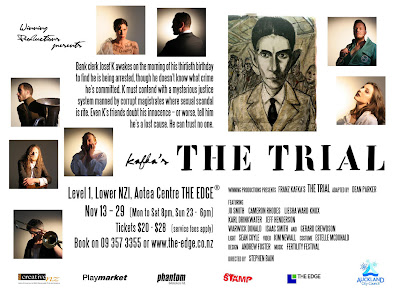 Kafka (1883-1924) was tall, dark and handsome (though with sticky-out ears), engaged three times (twice to the same woman), an attendee of public baths and cinemas (and brothels), a health nut (chewing each mouthful of food a set thirty-two times), a hypochondriac (who contracted tuberculosis [“Told you I was sick”]), bit of a wanker (judging from the pornographic magazines he subscribed to) and a dedicated writer (though a part-timer with a developed propensity for time-wasting).
His fabulous paranoia novel The Trial has been interpreted in many different ways. It has been read biographically as an account of his own particular circumstances with his indifferent fiancé, and his entanglements with bureaucracies while working energetically and ambitiously for a sort of trade union Accident Compensation Commission.
The French philosopher Sartre read The Trial as a Jewish writer’s parable of anti-semitism, while Sartre’s contemporary, Albert Camus, chronicler of the condemned, found a kindred spirit in Kafka and wrote, characteristically, that Joseph K finally “embraces the God that consumes him”.
Recently a piece in the English Guardian mentioned the identification of contemporary South African and Israeli novelists with Kafka and the inscrutability of their respective nation states. It quoted J.M. Coetzee that Kafka understood “the obscene intimacies of power”.
Certainly, when I was asked to do this stage adaptation I found I could easily give the project a 21st century tweak by adding a recent transcript from an Israeli court interrogation where a Palestinian was held in detention suspected of something so heinous it couldn’t be revealed, not even to his lawyer.
But it was also while I was working on this adaptation that I realised what seems so often ignored by interpreters of The Trial. And that was the sexual politics of it all.
So much of The Trial seems about sexual guilt. There’s an attitude to women, of fear, sexual availability and culpability. It runs through the book like a stain in a sheet.

Links to reviews and interviews

The Listener review by Frances Edmond 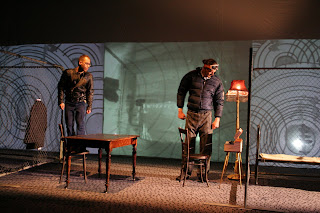 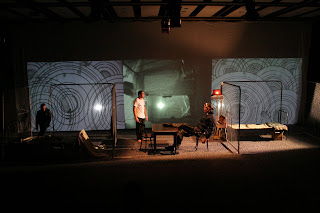 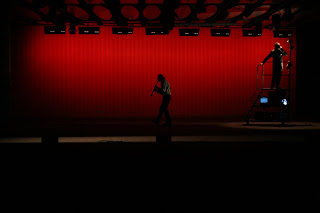 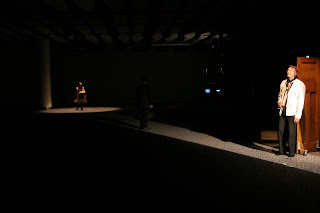 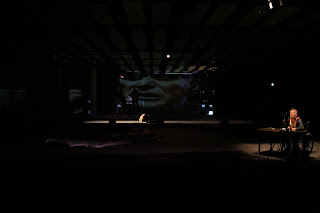 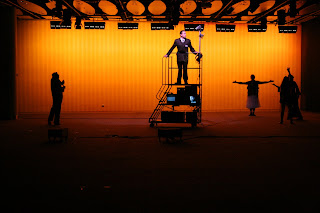 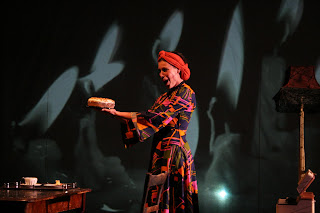 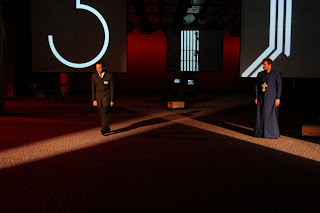 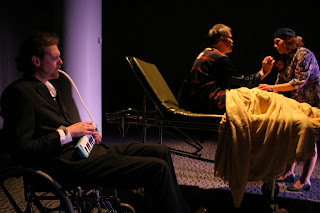 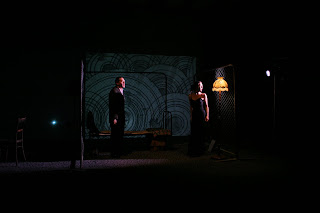 Karlos Drinkwater – Josef K
Karlos graduated from the NZ Drama School in 1999. Since that eternity he has appeared in many theatre productions around the country. Karlos has stepped out of the lime light for the last few years to line his pockets with ill gotten loot. Karlos and Stephen first worked together on The Irish Annals of Aotearoa at BATS Theatre. Other stage productions include Guantanmo at Centrepoint and Whale Rider at the Civic Theatre. Last year he appeared in Greg King’s feature A Song of Good and 1 nite by Amabir Singh. During rehearsals Karlos as been well impressed with the musical aspects of the trial and has decided to buy himself a drum set. Rock on.

Warwick Donald - performer
Warwick is a multi instrumentalist who fronts The Control 6580 Radiophonic Blues Ensemble, plays with William John Hooker plays the bad blues band and Fertility Festival, who won the ‘Wellington Fringe best music award’ this year. Warwick was also involved as a core member of The Ascension Band, Thought Creature and Luxury Liner. He tours as a sound tech for Wellington big bands, Village of The Idiots and Zirkus. Warwick is currently working on albums with Zirkus, Ginger Brown and JP Young. He has had his love of jazz beaten out of him by a local training establishment and is also a qualified metaphysicist.

Cameron Rhodes - performer
Cameron was last seen on stage in Silo’s The Threepenny opera and ATC’s Design for Living. He is currently directing 40 actors in The Reindeer Monologues on at The Basement in December. This year he has appeared in two upcoming films Brave Donkey, a short film by Greg King, and a feature The Devil’s Run shot in the Waitakere’s earlier this year.

Jo Smith - performer
Jo Smith has performed in two other Winning shows; Stories Told to me by Girls which toured NZ and The Arsehole in a shop front window in Customs St. Jo has created three shows with Stephen Bain and six shows with Andrew Foster. She first met Sean Coyle when he was a tech student and she was an acting student at Toi Whakaari, NZ Drama School in 1992. Jo was last on stage with Cameron Rhodes in She Stoops to Conquer at Downstage Theatre and Karl Drinkwater in Irish Annals of Aotearoa at BATS Theatre. She has performed at various times and places with Jeff Henderson. Jo has become a big fan of Liesha, Warwick, Isaac & Gerard since working with them on The Trial. Jo's great grandfather Isaac Smith played the cornet in a brass band in Whangarei.

Liesha Ward Knox - performer
Liesha works extensively on both stage and screen. Stage credits include Cymbeline, Bad Jelly the Witch, Plenty and Shakespeare Unbar’d, My Name is Gary Cooper and Blackbird. Liesha’s television credits include Mercy Peak and Shortland Street. On the big screen she has featured in Tim McLachlan’s Hidden and Nikki Caro’s Memory and Desire. Liesha has her own company, Phundmi productions. Next year they will present The House of Bernada Alba by Garcia Lorca. Liesha is a proud member of Actors Equity.

Jeff Henderson- various
In 2009 Jeff Henderson undertakes the position of Director of the National Centre for Cosmic Sound Energy Research. He is excited to be travelling unmapped sonic spaceways and looks forward to meeting you in other dimensions.
Home
Subscribe to: Posts (Atom) 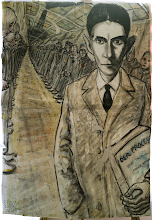